In recent years, the issue of privacy has become central in many areas. First of all the web, where industry giants such as Google, Apple and Microsoft are moving to give users more and more control over their data.

A prime example of this movement in defense of privacy was Google’s announcement  of an almost cookieless future – currently delayed until 2023. The news will see an end to third-party cookies, i.e., all those “digital footprints” that users leave on the web during their browsing paths. One of the most recent steps that follows in this direction is definitely the one regarding the IOS15 update, released in September 2021, which introduced substantial changes regarding the tracking of email data in the Apple Mail app.

During the last Worldwide Developer Conference, Apple announced the arrival of its latest update for IOS15. In addition to providing new features regarding Facetime video calls, acoustic improvements and updates to the Messages app (which is made more and more similar to Whatsapp), IOS15 introduces the Mail Privacy Protection, which basically involves the automatic download of tracking pixels within all emails received with Apple Mail and the IP hiding.

A tracking pixel is nothing but a tiny image – invisible to the user – inserted inside commercial and marketing emails, which is downloaded from the server when a message is opened and is therefore used to measure the open rates of an email campaign.

What will change for Email Marketing with the new update

First of all we must clarify that the update will not be automatic, but it will be up to the user to decide whether to select the option of masking the IP address or to continue with the previous setting.

All those who have already installed the IOS15 update on their Apple devices, will have come across this message when opening Apple Mail:

But what does the protection option actually provide? First of all – and this is one of the changes that particularly affects the email marketing industry – the automatic download of the tracking pixel by the mail client, which means that every email received on Apple Mail will automatically be considered as read, whether it is opened or not.

This obviously affects email marketing metrics and makes any statistics regarding open rate much less accurate.

Not only that, inaccurate open rates will also affect other indirect metrics, such as automations based on opens as triggers, statistics regarding best open times, subject line-based A/B tests, and recognition of the type of device – desktop or mobile – used for reading.

How you can adjust your Email Marketing strategy

If what you’ve read so far makes you fear in an imminent decline of email marketing we would like to reassure you straightaway that nothing like that will happen.

In fact Apple’s update, as we said at the beginning, is part of a broader framework of greater awareness by users of how their data are tracked and used. Before Apple, Microsoft with Outlook and then Google and Yahoo! have already activated systems of masking of tracking pixels and given to their customers the possibility to hide their IP addresses.

And Email Marketing never disappearded. This change will be an opportunity for the whole industry to renew itself and will give brands the chance to study more and more user-oriented and content-focused strategies.

Here’s how you can adjust your email marketing strategy as a result of Apple Mail Protection:

1. Give more value to clicks

Open rates aren’t the only metric that matters, and they’re certainly not the most significant. While the iOS15 update becomes a hindrance to the generic analysis of your campaign performance, it can also steer you towards the use of more effective metrics such as clicks, which demonstrate not only the undoubted reading of your emails but also – and we would say, above all – a real interest in your content.

2. Assess the impact of Apple’s customers on your database

Mail Privacy Protection only affects Apple Mail customers, so only a slice of your customer database. Some players estimate that Apple’s market share is around 10%. Others claim that the share can fluctuate between 10 and 40%. Undoubtedly Apple has a non-negligible presence, to be taken into account for this type of analysis.

Evaluate then which portion of your database will be actually affected by the update, remembering that  there will also be a percentage of users who will choose not to select the protection option. 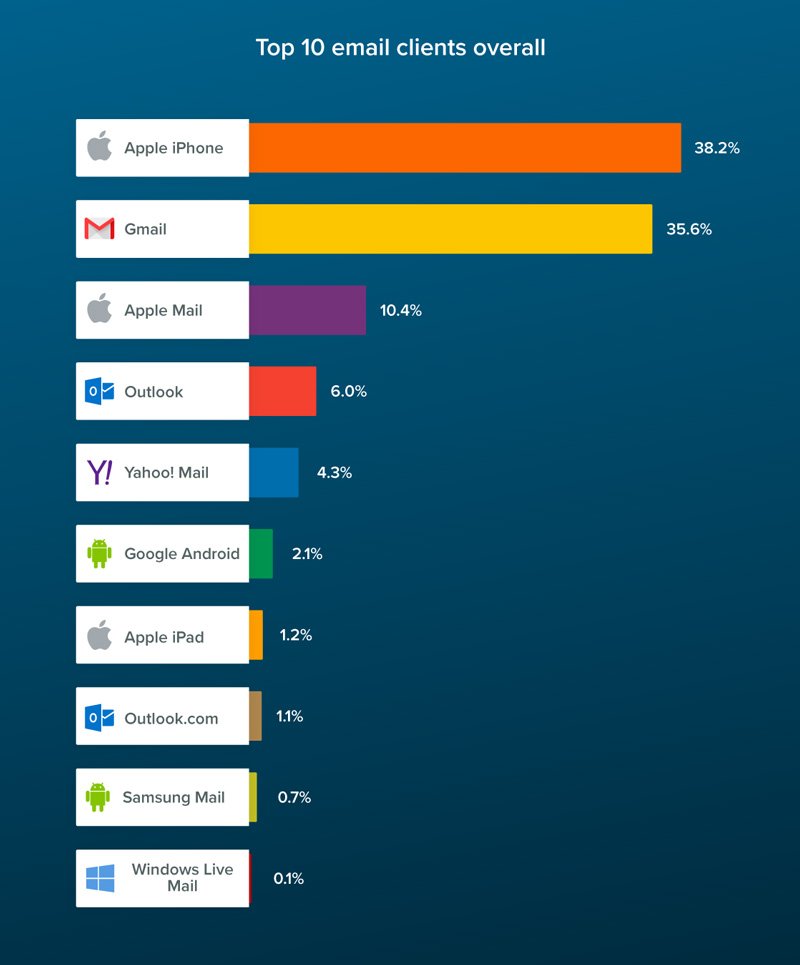 3. Create new triggers for your automations

If automations based on readings are no longer performing well, that doesn’t mean they all have to disappear. You can continue to send automated emails by choosing new triggers such as clicks on links or call-to-action buttons.

Location data is certainly important because it allows you to customize different types of communications (such as in-store promotions for those who live near your store, or special local marketing activities). If the IOS15 update will limit the collection of location data from your Apple customers, you will still be able to collect them directly by including surveys and contact forms in your email campaigns, always reminding your readers that you don’t need that kind of data to invade their privacy but to send them interesting content that is more in line with their interests.

In short, the world of email marketing is surely going through another transition phase, which, however, should not frighten the insiders.

The world of digital marketing is constantly evolving and this, like all changes, should not be seen as a difficult task but as a new opportunity to structure strategies based on the value of content and the interest of the recipients.

The IOS15 update will still need a few more months to be released and activated by all users with Apple devices. By consequence, you have time to focus on a new email marketing strategy based on engagement metrics and offer your users increasingly relevant content.

In this scenario, in which it is still difficult to make predictions, rdcom stands by the position of the main market players and evaluates all possible tools to maintain high standards of service. Stay updated on our channels or contact our Customer Support Team for any need.

Email Marketing: the guide to trends and strategies for 2022
Scroll to top